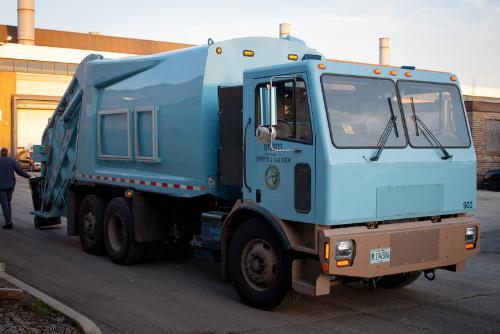 hicago is now home to North America’s first and only all-electric garbage truck, a vehicle is much quieter than conventional diesel refuse trucks as well as has no tailpipe emissions, contributing to a healthier neighborhood environment in our communities. The vehicle saves more than 2,500 gallons of gasoline a year, has a payload capacity of 9 tons, and 200 kilowatt-hours of energy.

The truck, named the Electric Refuse Vehicle, was made by California-based Motiv Power Systems, which won the contract from the City of Chicago in 2012.

“We are constantly looking to modernize and improve the City’s fleet operations through environmentally conscious choices,” David Reynolds, Commissioner of the Chicago Department of Fleet and Facility Management, said in a news release.  “Chicago is proud to be home to North America’s first all-electric refuse and recycling truck, and we look forward to examining how this truck can boost efficiency, reduce emissions and save tax payer dollars in the future.”